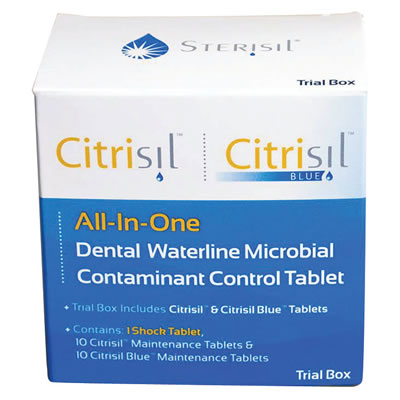 Potential patient and staff exposure to microorganisms/ biofilm in dental waterlines is well-documented, as is the need for diligent purification protocols.1-3 The Citrisil waterline purification system from Sterisil continuously disinfects and maintains dental waterlines, ensuring ADA and CDC compliance. The system consists of 20 stabilized silver tablets: Citrisil SHOCK (a ~oncemonthly tablet that removes and prevents waterline deposits) and Citrisil (for ongoing maintenance).

For ongoing maintenance, clinicians have the option of using the white Citrisil tablet or the identically formulated Citrisil Blue, with a tint that provides visual evidence of compliance. The tablets are EPA-registered to produce ? 10 CFU per mL HPC purity (50 times below ADA and CDC guideline requirements).

Once dissolved and flushed through each line, the SHOCK tablet begins to clean and prevent deposits. Citrisil Blue enables compliance verification and visualization of the water level. The unique packaging encourages a methodological approach to water quality maintenance; 1 box disinfects and maintains waterlines for 1 operatory chair for 20 bottle-fills, after which it is time to “shock” again.

Of the 5 dentists and 7 hygienists and assistants who evaluated Citrisil, 7 rated Citrisil Blue as excellent, 3 rated it as very good, and 2 rated it as good. Six evaluators called it their favorite feature. A dentist and first-time waterline purification user said it “lets us know when the product has made it through the lines,” and an hygienist said it “makes it so much easier to see the water level and feel confident topping off…if the blue disappears, you add another tablet.” “I liked the tint to confirm that I was doing the procedure correctly and the water was properly treated before patient use,” said another evaluator. “It saves time by allowing us to easily tell how much water is in the container and whether we need to add another tablet,” noted a Fremont, NE dentist.

Inclusion of the SHOCK tablet was rated as excellent by 5 evaluators, as very good to good by 6, and as fair by 1. One evaluator said it “never fully dissolved” and another said it would be “more convenient not to have to let it sit for 8 hours.” Of the 4 evaluators who called SHOCK a favorite feature, 1 called it “easy to use…I didn’t have to worry about testing for microbes.”

Citrisil SHOCK is designed to be used once monthly or every 20 bottle fills (whichever comes first). The effervescent orange tablet is allowed to dissolve completely in 6 ounces of distilled water as it cleans and disinfects the inside of the bottle.The next morning (or, preferably, after the weekend), the bottle is filled with water and the lines are purged until the orange color disappears before the Citrisil white or blue tablet is dropped in. Thereafter, maintenance is accomplished with 1 white or blue tablet per refill of each self-contained bottle.

Ease of use was rated as excellent by 6 evaluators, as very good by 5, and as good by 1. One evaluator suggested “an in-house water test with the system as assurance of its effectiveness.” One of the 4 evaluators who called ease of use their favorite feature also noted that it “doesn’t require any mixing of solutions.” Another evaluator said “the way it’s dispensed” was what she liked most. One evaluator said the instructions were “rather vague,” another called them “a little unclear about the difference be tween tinted and untinted,” and a third suggested “a better explanation of how it works.” One hygienist called the instructions “simple to follow.”

Formulated to be tasteless, the taste of Citrisil-treated water was rated as excellent by 4 evaluators, as very good by 4, and as good by 4. A Talent, OR hygienist said, “The water tasted normal! It didn’t have the foul odor or taste sometimes attributed to purification tablets.” The same evaluator added, “With other brands, patients have complained about bad taste and the water becomes foamy while filling the bottles…not something I’d want in my mouth.”

Ten evaluators said they would definitely or probably recommend and purchase Citrisil. “I like the idea of keeping the water lines cleaner,” said a Florida hygienist. Overall satisfaction was rated as excellent by 3 evaluators, as very good by 7, and as good by 2.