Some company founders are called “pioneers,” and then there’s Max Zuest, the founder of the company now known as Zest Dental Solutions, who embodied a spirit of adventure and imparted a legacy of innovation.

In the late 1940s, Zuest, a dental lab technician and Switzerland native, built a 35-ft motor yacht completely outfitted with a dental operatory and laboratory. He left his Vancouver lab in the care of his associates and cruised up and down the coast of British Columbia with a dentist friend for two years, performing dental services for logging camps and accepting cash payment.

In 1950, Zuest sold his yacht and the lab, and relocated to San Diego, CA. There, he started Zuest Dental Lab, which grew to more than 100 employees. In 1972, Zuest had the idea that would revolutionize not only his business but also the dental implant industry. The Zest Anchor Attachment originated from the common and continual problems that his clinician customers were experiencing with patients’ overdentures, particularly the damage caused by patients improperly seating overdentures.

In 1977, Zuest’s son Paul joined his father, and Zest Anchors was officially formed. The company continued to lead through innovation, eventually moving in 1990 to a larger facility in Escondido, CA. In 1994, Zest Anchors released the ZAAG (Zest Anchor Advanced Generation) attachment, designed for all 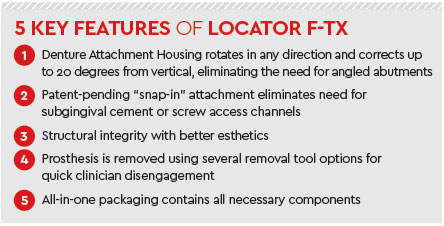 Spearheaded by Paul Zuest and Scott Mullaly, LOCATOR set a new standard in implant dentistry. It was a rare time when clinicians, patients, and industry professionals came together in consensus about the merits of a restorative solution. More than 100 manufacturers have partnered with Zest to customize the patented system and make it compatible with their respective implant platforms.

In 2013, dentists who use the LOCATOR Overdenture Implant (LODI) System completed a Dental Product Shopper evaluation and awarded it a “Best Product” designation. Ease of placement and flexibility were the highest-rated features.

Zest’s implant products also include the SATURNO narrow-diameter implant system and the CHAIRSIDE portfolio, a line of dental tools and materials that provide an end-to-end solution for implant-retained overdenture modification and processing.

The success of LOCATOR pushed Zest to the forefront of innovation, and they haven’t taken this position of influence for granted.

“It is our aim to continuously improve and develop our products by building on this expertise,” stated President and CEO Steve Schiess.

During this period of innovation, Zest also planned for the future. In February 2016, the company acquired Danville Materials and its high-quality line of dental consumables, micro-etching and air abrasion products, and unique offerings such as Perioscopy, which allows clinicians to diagnose and treat periodontal disease in a minimally invasive way.

The Danville acquisition complemented the clinical solutions Zest was known for and positioned the company as one that offers product solutions for a continuum of patient care, from preservation of natural teeth to the treatment of total edentulism.

Danville products have been known to provide high quality at a good value. An example is Bulk EZ with IntelliTek Curing Technology, which has reinvented bulk-fill composites by addressing the limitations of many products, including gap formation and stress from rapid curing. In the fall, the company plans to introduce a new cement that uses this same patentpending technology.

It became apparent that Zest is much more than an “Anchors” company. They wanted a name that would better reflect their vision for the future, and so the company rebranded to Zest Dental Solutions. Currently headquartered in Carlsbad, CA, the manufacturer has grown to nearly 270 employees.

“Forty years ago, the Zuest family set out to make a difference in patients’ lives,” Schiess reflected. “I am honored to be a part of a company that has made such a large impact in the dental industry, supporting clinicians, and ultimately improving patients’ quality of life. I am excited for the bright future Zest has in bringing additional innovations to the dental community.”